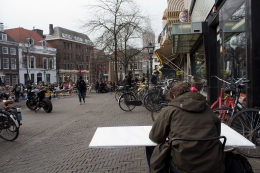 Triptych of the market square in The Hague

The market square is a vibrant place with an astonishing variety of people, always prepared to make conversation. From the Prinsegracht you get a view of the church tower beyond, so that is where I set up my folding chair and drew this panorama.

This page contains information about the creative process, stories by The Hague people and background details about this special location. 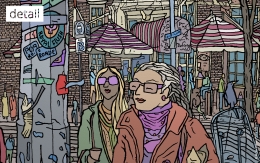 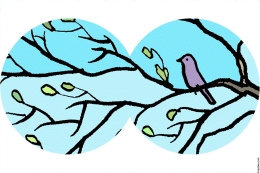 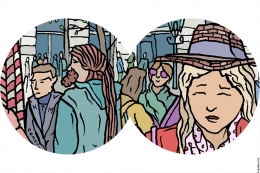 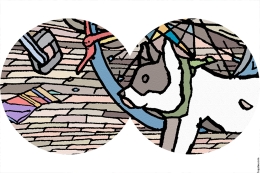 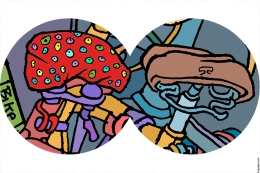 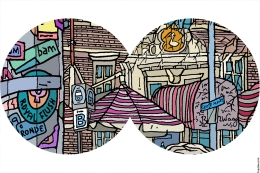 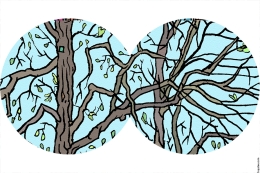 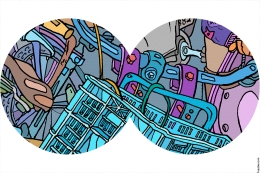 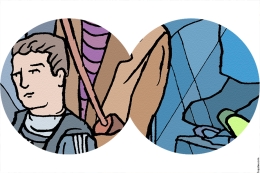 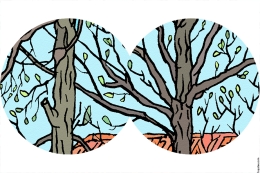 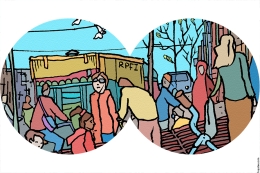 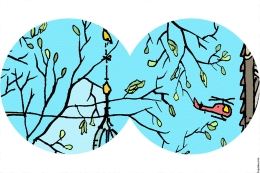 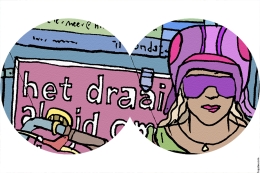 ORDERING A PIECE OF A TOWNSCAPE

Many customers want to see a panorama in real life before ordering. If you are unable to arrange a studio visit, I can send you a set of samples that will enable you to assess the quality and presence of the works.
A set of 4 samples costs 14.95 euros including postage. Each set includes one cardboard surround so one sample can be framed as a mini painting. You can order your samples by sending a message to info@huystee.com, mentioning ‘samples’ and the name of the townscape.

It is the first fine day of a Dutch spring. Mark cycles along the river Vliet to The Hague. A plastic seat sticks out from his luggage carrier. Under his right arm a man-sized foam panel to which he has taped a full-length drawing catches the wind at every turn. At ten o’ clock he arrives on the historic Grote Markt in The Hague, sets up his seat in front of the Randstad temping agency, and lays the drawing board across his knees.
‘You’re in the shade’, I warn him.
‘Don’t worry; the sun will soon get round to me.’
He picks up a fineliner, and without any warming-up exercises draws a few lines, catching the outlines of the restaurants and cafés across the market square spot on.
I study Mark’s drawing. He has already spent two days drawing this spot. On the white expanse of paper, four patches of lines are scattered: some trees, an expanse of thousands of roof tiles, two highly detailed bicycles, and a sticker-covered lamp post.
How will they ever be joined up, I wonder. I worry they’ll never get connected.

Mark appears relaxed. He points to the bicycle on the right-hand side, only 80 percent of which has been finished. ‘That lady simply had to leave; she kept apologising. I really had to put her mind at rest that I would be able to fill in the missing rear wheel using another bike that will be parked in the same spot later on.’
In the meantime the first fans have gathered to look over Mark’s shoulder and praise his skills: ‘I say’, a girl with a round face exclaims. ‘I say, you really know how to draw!’
‘It’s just a question of practice, you know’, I say.
The girl looks at me in surprise.
‘You should have seen his first townscape. It was hopeless. Mark really has made a lot of progress these last few years.’ The girl quickly snaps a few pictures of a grinning Mark, and walks off, shaking her head.
An elderly lady with an American accent calls over to Mark: ‘I know you from Delft.

I visited your studio.’ She bends over to inspect the bicycle drawing, the one that Mark had to leave unfinished.
‘I put my heart and soul into that bike’, Mark confesses.
The lady nods. ‘The detail is fascinating.’
‘Yes, the more I see, the more I draw’, Mark says. ‘Bikes are such fun to draw. So much of the technology is in full view. It’s different with cars. They’re just large, boring expanses of metal.’
The American lady says her fond farewell. I ask Mark about the differences between The Hague and Delft. After all, this is his first outing to The Hague after all the Delft townscapes he’s made over the past few years.
‘This square is very much alive. Lots of young people come here. You see more different kinds of people here than you do in Delft. You also see people who seem to have come unstuck a bit.

In Monday there was this boy yelling his lungs out. And then there was this drunk who suddenly shouted ‘Right, time to find me a job’. He then walked into the temping agency.’
‘And after that?’
‘Never saw him again!’
Mark’s hand has stopped drawing for a while. He’s watching a bird of prey circling the church spire. A bit later he points out a jackdaw that has settled on the handlebars of a bicycle. ‘Just like at its antics.’ The jackdaw hops from handlebars to saddle, and on to the next bike.
‘What is it with you and birds?’
‘I love the way they can simply up and go to another place. They can get anywhere they like. It must be a one heck of a feeling.’
I nod and think to myself: Mark too is a kind of bird. One day he’s in Delft, the next day you can find him in The Hague. All he needs is a place to sit, a drawing board, his fineliners and his eagle eye; all things that he can bring along on his bike.

‘So what have you got in mind?’, I ask. ‘Will you be conquering The Hague next?’
‘Er, no, I want to do townscapes in different towns. After The Hague I shall probably go to Haarlem.’
As he makes up his strategy on the spot, he starts drawing in the remaining free space between the stickered lamp post and the tree. It’s the head of a woman hurrying past; her nose, her eyes, mouth and hair. He waits until a second woman passes and draws her shoulder bag. ‘I will now draw bits and pieces of people’, Mark says. ‘Let’s see how many passing women I need to draw one complete figure. Look over there, there comes a shawl I can use. It’s not as elegant as the shoulder bag, but it’ll do.’
I say: ‘Now I understand why the people in your drawings are dressed as haphazardly as they are.’
Mark remains unflappable and continues to draw his woman in the making.

Five minutes later he puts down his pen: ‘See, I needed ten passers-by to draw a single woman.’
At that moment a girl in a short skirt passes by Mark’s outdoor studio. She’s wearing tights. ‘That’s the first short skirt I’ve seen this year’, I say.
‘How many short skirts does it take to make it Short Skirt Day?’
‘At least two’, I blurt out. ‘And, no tights!’
‘Exactly’, Mark agrees. ‘One short skirt does not make a spring’.

By now it’s noon. The outdoor cafés are filling up. ‘Isn’t the sun lovely’, a woman at one table sighs. ‘Lots of vitamin D.’ Mark has spent two hours at his drawing board. I suspect he will need another seven drawing days to finish his townscape. Given a good spring he could be done by mid-April. That’s when he will start doing the colours on his computer. Another hell of a job.

‘Let’s see how many passing women I need to draw one complete figure.' 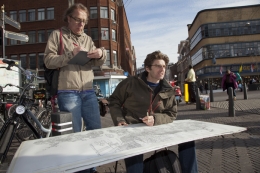 Curious name for a dog: ‘Monkey’! He got included somewhere in the panorama; find-the-faces on a grand scale! 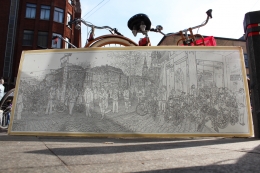 After 46 hours of drawing. 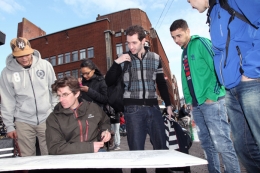