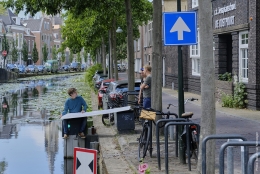 The vantage point near the water gate at the end of the Oosteinde canal commands a perfect view of both sides of the canal, the old town gate, the Oostpoort School and a pub, De Nieuwe Prins. The perfect place for a townscape, especially in these Corona-dominated times, with social distancing being the rule. The references to the pandemic are subtle, with the occasional face mask, an arrow pointing the way on the pavement, and of course the one thing missing altogether: not a single airplane in sight. 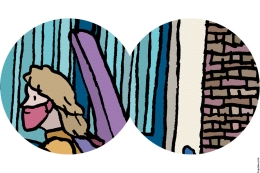 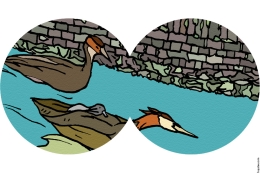 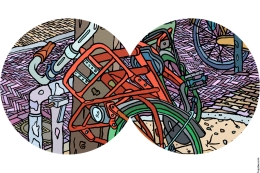 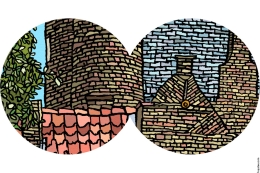 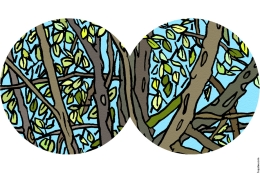 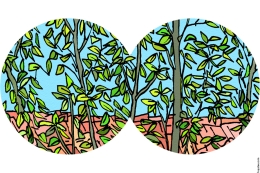 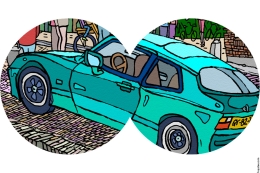 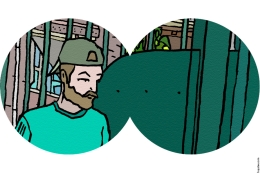 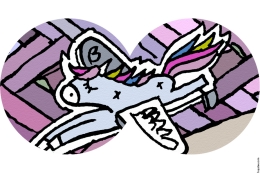 ORDERING A PIECE OF A TOWNSCAPE
Many customers want to see a panorama in real life before ordering. If you are unable to arrange a studio visit, I can send you a set of samples that will enable you to assess the quality and presence of the works.
A set of 4 samples costs 14.95 euros including postage. Each set includes one cardboard surround so one sample can be framed as a mini painting.
You can order your samples by sending a message to info@huystee.com, mentioning ‘samples’ and the name of the townscape.

Mark is good at multitasking. He can carry on a conversation while at the same time guiding his magic left hand to deftly draw a tree next to the canal. A woman standing next to him wants to know how the Corona crisis features in the drawing. Mark explains that, apart from the face masks and the toilet paper being hoarded, there is another clue: ‘The clear blue skies! Normally I like to draw any airplanes that pass overhead, but there aren’t any. It’s gone quiet up there.’ All around Mark is a hive of activity. The Oostpoort School finishes at 2 p.m. and some thirty-odd parents are lined up along the street waiting for their children to come out, the school yard being off limits. Two of the teachers are standing at the gates and, assisted by janitor Ed, make sure each child is delivered safely. For a writer like me this is the perfect time to catch snatches of conversation. Some of the children are arranging to go over and play at a friend’s house. Parents are discussing the details. A father in a checked shirt and shorts asks a blonde woman standing at the prescribed 1.5 m distance: ‘Are they coming to play with us, or at your place?’
‘Our place.’
‘Which is where?’
‘Piet Heinstraat 37.’
‘Right, I’ll come and pick her up at four thirty. Bye!’ And off he goes.
Sometimes the deals are not as easy to make. Floor, a girl aged about eight, is in tears. Her mother explains to the man half a metre away that her daughter has only recently recovered from an illness, and that this was her first day at school, but she is not yet allowed to visit friends. The little girl starts to cry even louder. ‘But you’ll be able to go next week, Floor.’
The man and woman discuss other options. Saturday might be available, in spite of a hockey engagement in the morning. Floor manages a smile between tears: ‘And Saturday comes before next week, doesn’t it?’
‘Yes, it does,’ her mother nods in agreement.
The first parents are leaving the location. One father looks far from amused as he carries a child’s bicycle in his arms. His son follows timidly. Clearly a case of a disappearing key.
A little girl holding on to her scooter looks over Mark’s efforts, and recognises the red car parked along the canal’s edge. ‘That is miss Eugenie’s 2CV!’
‘That’s right’, Mark replies.

Miss Eugenie, who had been standing at the gate, joins us when she hears her name. She beams with pride as she recounts how she persuaded Mark to give her 2CV pride of place in the drawing: ‘I put him under pressure. I said: “What a pity that the best-looking car in Delft is not in your picture.” I then went to get my car, which was parked around the corner, and put it in the empty parking space next to the pub.’ She adores her 2CV: ‘When Mark finishes his drawing, we will be buying the first print! We’ve had the 2CV since 1989. Bought it locally. It’s been rebuilt from the ground up. The only original part is the bonnet. They grow on you, you know,’ she sniggers, ‘like a pet.’

Eugenie clearly enjoys the startled expressions on our faces and continues: ‘My husband and I love old cars. We’ve got another four of them.’
‘You’re joking!’
‘It’s true. We keep them in a special shed. There is a Citroën DS, a Citroën Méhari, a Citroën H van with corrugated sides, and an original 1968 Fiat 500, such a sweetie.’
Mark shakes his head: ‘Now you tell me! You should have parked all five of them in a row. I could have made a townscape with nothing but classic cars in it. Confusing street view 2020.’

“A father in a checked shirt and shorts asks a blonde woman standing at the prescribed 1.5 m distance: ‘Are they coming to play with us, or at your place?” 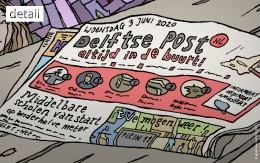 VIEW OF THE OOSTPOORT BY JAN VAN DER MAST

Mark sits on the steel box with the traffic lights that control the movements of small boats on the old canal. He is perfectly at ease as his drawing board starts to fill up with houses, pavement, foliage and passers-by. The focus is on the Oostpoort (East Gate). This is an unexpected perspective.
When Mark sent me a message to say he was drawing the Oostpoort, I imagined it would be from the spot used by every tourist to take pictures of the ancient town gate: standing on the bank of the new canal outside the old town and looking out at the gate building and its iron drawbridge. This is a ‘View of Delft’ that Vermeer appears to have given a miss. The Japanese tourists don’t mind: their Dutch theme park at Sasebo (Nagasaki) includes a replica of our Oostpoort.
Mark is drawing the mediaeval town gate from the side of the Oosteinde canal, inside the town wall. He enjoys his spot: ‘It’s safe, without people breathing down my neck’.
‘But what about the noise?’ Behind Mark, the children of the Oostpoort School are running and yelling. The primary school playground is right next to Mark.
‘Oh, that? It won’t last long. They are just having their break.’ The children, running about, chasing each other, conducting intimate conversations, appear to be oblivious to the concept of social distancing.
Today is the sixteenth of June, three months after the Corona crisis erupted. Mark’s drawing contains a few subtle references: a woman walks by clutching a bundle of toilet paper, another passer-by is wearing a face mask. ‘There’s bound to be another one soon’, Mark grins. He took advantage of the worst of the Corona period to go for night-time walks with his daughter, exploring unknown parts of Delft, revelling in the serenity offered by some places. ‘Lovely; no tourists, no rowdy students. It gives you a whole new way of experiencing the town.’
We discuss the atmosphere of the location, the main buildings. On the right-hand side the view is dominated by the facade of De Nieuwe Prins (The New Prince), a long two-storey building. ‘Just look at the way the roof undulates,’ Mark says, ‘although I have straightened it out a bit in the drawing.’ The building houses a traditional pub offering billiards, but there is no sign of life. Has it managed to survive the crisis (and the ‘intelligent lockdown’)?

My friend Google tells me that the building (189 m²) came on the market three weeks ago. The asking price is 795,000 euros. By the time Mark finishes his townscape, there will no doubt be a new owner, the Newest Prince.
The striking facade to our left carries a tiled decoration bearing the legend ‘the skin trade’. Two white men are shown bartering over a skin with its tail still attached. ‘Is this politically correct, Mark? Does it have anything to do with slavery? The pair of white men are grinning broadly as they strike their deal. Shouldn’t we be chucking paint at this image, or tearing it down?’ A tidal wave of iconoclasm has recently held the world in its grip. Winston Churchill, Dutch naval hero Piet Hein, Bristol slave trader Colston… They were either toppled from their pedestals or had paint thrown at them because of their racist ideas or involvement in the slave trade.
Mark reassures me by informing me that the image refers to the tanning business that once occupied the building. Which is correct, according to Google. It was H.H. Roes who in 1856 set up business here, and made such a success of it that fourteen years later he was able to build a grand house next to it: Villa Roes. Mr. Roes was rich, was appointed a deputy-mayor, and in 1895 paid the highest taxes of anyone in Delft, but I can’t find anything about his tanning business. I do find a lot of personal ads taken out by Mrs. Roes, who was on the lookout for a capable kitchen maid, a second housemaid, a reliable cleaner for the month of April, a female assistant, etc. Female help appears to have been coming and going at Villa Roes. It makes me wonder what was going on inside that respectable house. I look at Mark’s drawing. The villa is there in all its glory, but we will never know what went on behind its facade.

“The children, running about, chasing each other, conducting intimate conversations, appear to be oblivious to the concept of social distancing.”