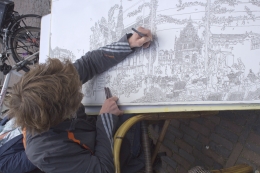 Townscape of the Grote Markt, Haarlem

From a table outside Brinkmann’s café you get a great view of the old market square of Haarlem. This is where I drew this panorama.

This page contains information about the creative process, stories by Haarlem people and background details about this special location. 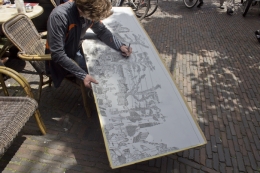 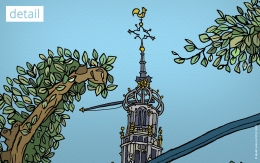 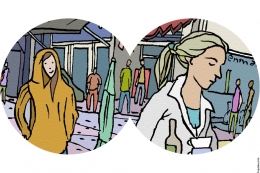 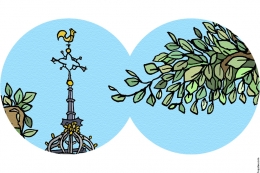 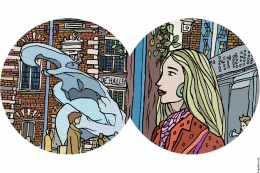 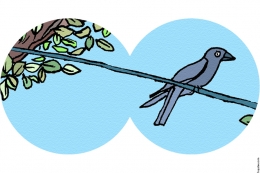 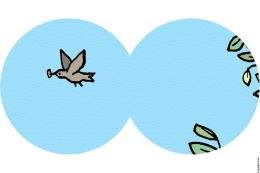 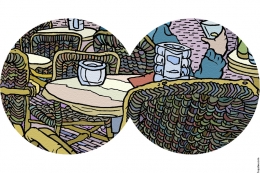 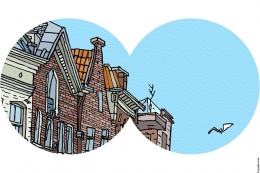 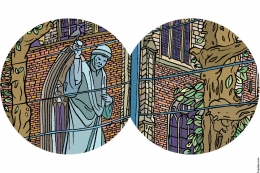 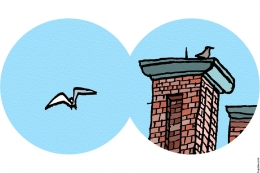 ORDERING A PIECE OF A TOWNSCAPE

Many customers want to see a panorama in real life before ordering. If you are unable to arrange a studio visit, I can send you a set of samples that will enable you to assess the quality and presence of the works.
A set of 4 samples costs 14.95 euros including postage. Each set includes one cardboard surround so one sample can be framed as a mini painting.

You can order your samples by sending a message to info@huystee.com, mentioning ‘samples’ and the name of the townscape. 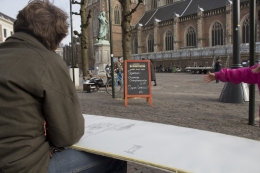 As I arrive on the Grote Markt, the central market square of Haarlem, I can see the historic facade of Brinkmann’s café and restaurant to the north, with in front of it – relaxing in a cane chair – Mark van Huystee with a townscape in the making on his knees. It’s quiet all around him. Mark is drawing in a sea of tranquillity. All right for him, but for me it’s going to be difficult to catch conversations from passers-by. This time it’s all down to Mark and the Brinkmann waiter, who, as he puts my cappuccino on the table, says: ʻI’m a semi-celebrity. I’m in the drawing. Look, there!ʼ He points out his portrait. ʻMy name is Alexander Hubert Schreuders.ʼ Face lit up in hope, he watches my moving right hand as I scribble on my notepad. He nods, satisfied when he sees his name appear on the paper.
I notice that Mark has extended the right-hand side of his drawing with a piece of paper. He has also added a strip of paper to the top. ʻI know, I let things run away with me again,ʼ Mark apologises.
ʻHow many hours have you spent on this one?’
‘42 Hours. My estimate is that I’ll need another 16 drawing hours.ʼ

Mark is as precise in his scheduling as he is in his drawing. ʻMost of all, I need to fill in the top part of the square, but I need to keep it sparse. I don’t want it to become crowded.ʼ
ʻAnd the sky? What will you do with that?ʼ
ʻI’ll keep it empty. The drawing needs that. Perhaps I’ll add a cloud or two.ʼ
Mark started the Haarlem townscape in early April, skipped a month on account of the annual fun-fair, and then did most of his sketching on some fine days in May. ʻWhen I started, the trees were all bare. That was useful, as it allowed me to see a lot more of the historic buildings across the square.ʼ
The semi-celebrity waiter returns, but this time he’s casually dressed, having finished his shift for the day. Two girl friends have come to collect him. They pause for a while behind Mark. The waiter explains how it can take up to six different passers-by for Mark to complete a figure in the drawing. ʻAh, a bit like a time line then?ʼ the tall blonde says.
ʻRight, a drawing with a very long exposure timeʼ, Mark confirms.
ʻCool.ʼ

To the front of the drawing sits a highly detailed BMW motorcycle. Mark recalls: ʻWhen the owner saw I hadn’t finished it yet, he went back into town to do some more shopping so I could complete it. He had some great stories to tell about his bike. It used to be a police motorbike, and would have been used in the sixties to chase down peace-loving beatniks.ʼ
ʻAnd the motorbike next to it?ʼ, the girl asks. ʻIs there a story to go with that one too?ʼ
ʻWell, its owner was in a bit of a hurry, so for the rear half of it I had to use a motor scooter that was parked in the same place later on.ʼ
ʻA bit of a mongrel, eh?ʼ
ʻThat’s it.ʼ Mark keeps drawing at a steady pace. He fills the facade of the St. Bavo church with hundreds of bricks. The townscape is nearing completion. The whole place oozes history: church, meat market, fish market, the bronze statue of Coster, the town hall with its impressive quintet of chimneys. And then there’s the dreadful Brinkmann Mall, a really gross mistake dating from the nineteen-eighties. It’s on the north side of the square and will not feature in the drawing. The mall – nominated as the ugliest place in Holland by a Dutch television programme – is being given a facelift, hopefully one that will improve its side of the market square a bit.
The waiter who has taken over the shift from Alex walks over for a quick look. ʻIs that you, Alex?ʼ

Alex nods.
ʻYou carrying a serving tray? You make it look like you’re actually doing some work.ʼ
Alex grins sheepishly.
In the distance I spot a seagull strutting its way along the balustrade of the Verwey Hall, so I point it out to Mark.
With a few quick strokes Mark catches the gull before it flies off.
Nice, I think to myself. That gull’s mine! I have contributed my own little bit to the Haarlem townscape. Satisfied, I lean back and order another cappuccino.

"And the motorbike next to it?ʼ, the girl asks. ʻIs there a story to go with that one too?" 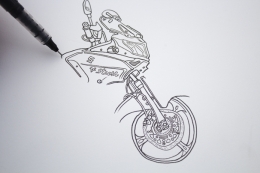 When I had drawn the front half of the motorcycle, it moved away. Shortly afterwards a motor scooter was parked in the same spot. Problem solved, and we now have a hybrid vehicle. 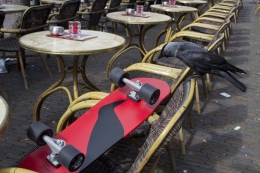 Practically all my townscapes include a number of birds. The market square features mainly pigeons and crows. The jackdaws can be quite inquisitive. In Delft they tend to be particularly ingenious: they toss walnuts onto the pavement to crack them. 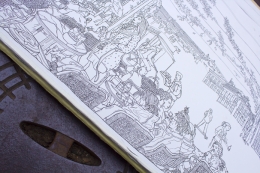 The tables outside the café are gradually filling. 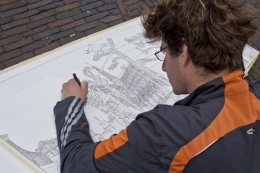 Often heard: “And all that using your left hand!” 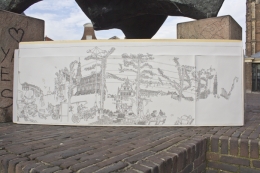 The intermediate result after 36 hours of drawing. 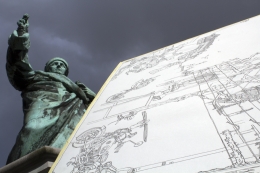 Coster and the panorama, just before the rain came. 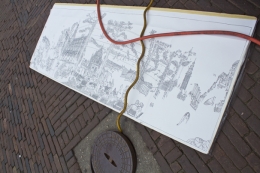 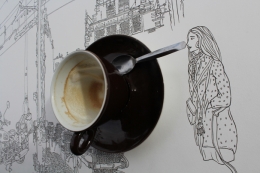 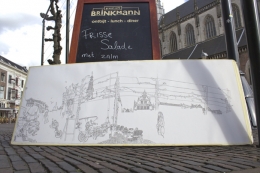 The panorama after 18 hours of drawing outside Brinkmann’s. 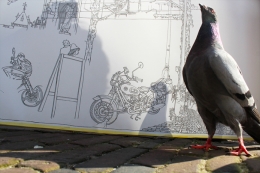 The panorama after about 11 hours of drawing. In the centre is an authentic 1965 BMW motorcycle that belonged to the Police Riot Squad. Apparently it saw action during the crackdown on squatters in the 1970s and 1980s.

A drawing from 1795 by Vincent Jansz. van der Vinne. The town hall and the row of chimneys can still be seen. What stands out is the long row of trees under which I sat drawing in 2012. They appear to have been trimmed in the same way as the ones in 1795 were. Timeless topiary! 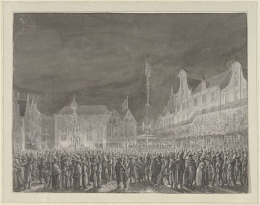 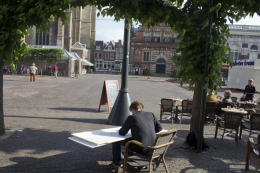 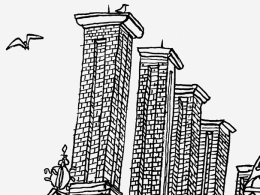 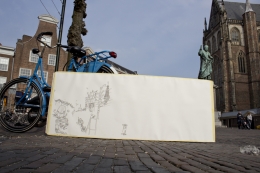 The panorama after some 7 hours of drawing (and over 50 to go).