Townscape of the Four V's in Delft

The Vrouwjuttenland, Vlamingstraat, Voldersgracht and Vrouwenregt canals meet at the Four Vs, the point where I drew this panorama. Longboards floated past, jackdaws cracked nuts and mothers struggled to get their carrier bicycles laden with children up the slope. After more than 150 hours of observing, drawing and colouring the panorama was finished.

This page gives information about the prints and how to buy them, outlines the creative process, includes stories by Delft people and provides background details about this special location. 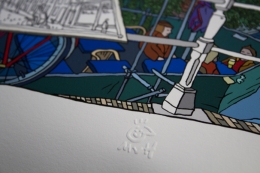 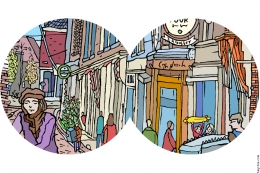 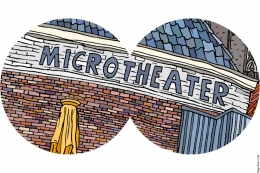 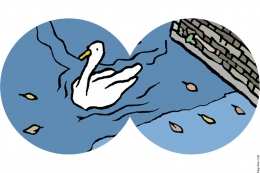 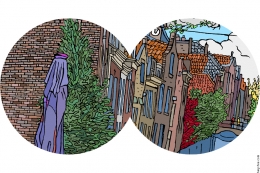 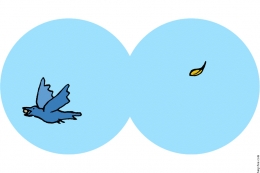 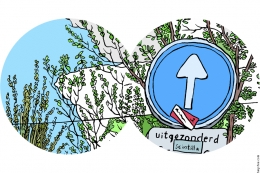 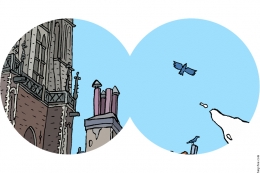 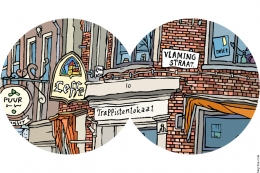 A Japanese man examines the panorama in silence. He stops by every day, takes a few minutes to look at the pen drawing, keeps silent and continues on his way, head bent down. It is halfway through October, and the sun is out. A coot floats by in the canal. Mark is putting the finishing touches to the panorama, which he has dubbed the four Vs. It is a lovely spot, with the canal taking a sharp turn and offering intimate views of the historic buildings backed onto the water, with a small beer garden on the corner. It is a dynamic place where four Delft canals meet: Voldersgracht, Vrouwenregt, Vlamingstraat and Vrouwjuttenland. A little further on there is another stretch of canal called the Verwersdijk, and there is a small side street, the Vlouw.
A burly bald man approaches me, holding a sheet of paper in his hand. Together with four of his colleagues he’s on a history hunt though Delft, and they need to know which famous inhabitant of Delft was born opposite the Oostpoort or East Gate.
I tell them: ʻNo idea; why don’t you go and see? It’s only a ten minute walk.ʼ
ʻWe’ve had enough for today. Perhaps you can tell us what kind of shop used to be at Brabantse Turfmarkt 86?ʼ
I shake my head ask them: ʻAre you doing this hunt for fun, or have you been sentenced to do community service?ʼ
They laugh and explain that they are out on a team-building event. ʻWe work for a healthcare institution in Rotterdam.

My usual job is to look after elderly psychiatric patients,ʼ the man says. He and his colleagues stand around for a bit, uncertain what to do next. A group of women on yellow scooter bikes passes by, chattering on their way to the Oostpoort.
ʻLook, there goes Bineke on one of those scooter thingsʼ, one of the women remarks.
ʻOh yes, the volunteer workerʼ, her pregnant colleague in brown leggings responds.
ʻNever. She works at our place. She does pastoral work.ʼ
ʻYou can’t be serious! She’s hopeless with people. So what’s her salary level then?ʼ
ʻYou don’t want to know.ʼ
ʻOut with it!ʼ
ʻ55!ʼ
ʻBloody hell, and there’s me, working my bloody socks off for half the money. That’s it, I’m getting into the pastoral business too.ʼ
ʻCome on, we’ve got to go. The others must be into their second drinks by now.ʼ
ʻBut we still don’t know who was born opposite the Oostpoort.ʼ
ʻSo what, we’ll just put down Vermeer.ʼ
ʻAnd what about the shop?ʼ
ʻThat was just a computer shop. A medieval computer shop.ʼ
On the bridge a very elderly lady pushes along her husband in a wheelchair.

She’s struggling up the slope. A passing cyclist dismounts, and helps her reach the summit. Now she’s on the downward stretch, and she’s having trouble keeping the wheelchair under control. She halts at the barber shop advertising ʻHaircuts – no appointment requiredʼ, tries to open the door, taps the window: the shop is closed. She sighs and turns the wheelchair around to negotiate the steep incline of the bridge a second time.
ʻCool!ʼ A boy with straight blond hair, who listens to the name Malte, views the panorama in awe. ʻPerhaps it would be nice if you were to draw out the scene to cover all the seasons. You could start on the left with spring, with trees in full bloom, and people wearing T-shirts. Then in the middle you could have a wintery cartoon, with people on ice skates and muffled in thick coats.

He’s really getting into the stride of his idea, and keeps adding flourishes.
In an sudden movement, Malte drops his eraser into the canal, then he chuckles as Mark records the event for posterity by including it in the drawing.
The bald healthcare worker folds away his treasure hunt form, looks at the drawing for the first time, and beckons his pregnant colleague over: ʻIt’s almost finished, but the most difficult part is yet to come. Guess which?ʼ
She squeezes her eyes shut and says: ʻYou mean the white rectangle in the middle?ʼ
ʻYep. My guess is that he’ll use that to show the entire panorama a second time. Picture-in-picture, you know.ʼ ʻChrist, imagine the effort.ʼ She scans her surroundings. ʻNow where can we find a nice place in the sun to have our drinks?ʼ

"Perhaps it would be nice if you were to draw out the scene to cover all the seasons." 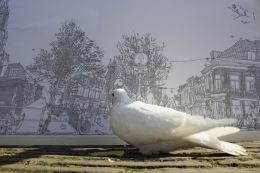 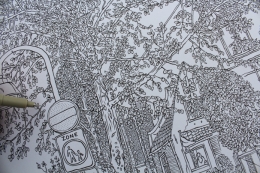 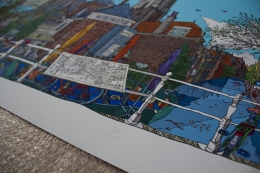 Autumn 2012, and I’m hurrying to add leaves before they fall. 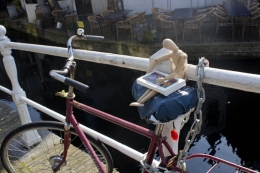 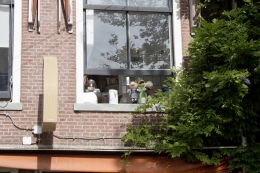 Kermit and Miss Piggy must also be included. 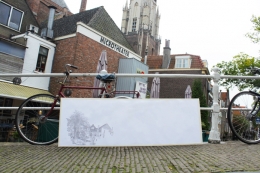 Planning: Kermit and Miss Piggy will be added to the far right of the drawing.

photo: Robert van Nimwegen.The artist with a Picasso head as seen by iPhone 5. 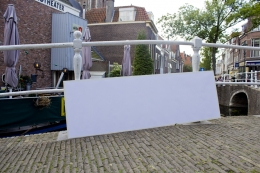 The starting point, a white expanse, on 14 September.