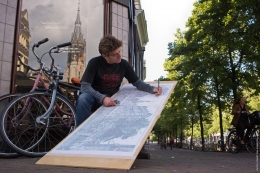 The view of the fish market, the New Church and various surrounding buildings is great from the corner of the streets Hippolytusbuurt & Nieuwstraat. After more than 190 hours of observing, drawing and colouring the panorama was finished.

This page gives information about the prints and how to buy them, outlines the creative process, includes stories by Delft people and provides background details about this special location. 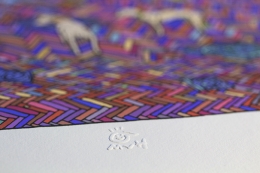 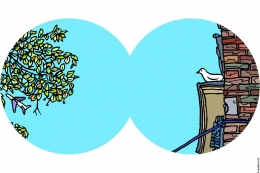 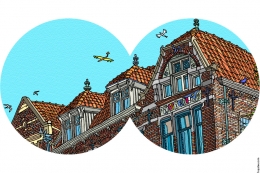 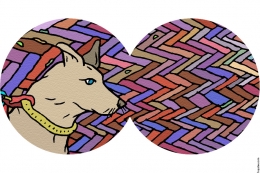 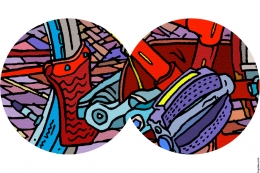 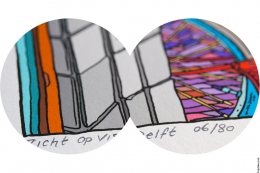 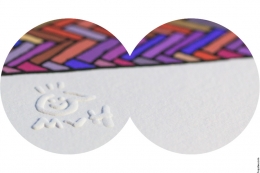 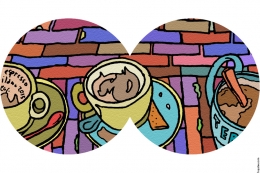 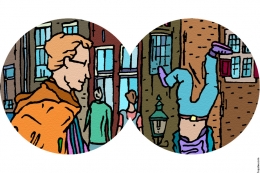 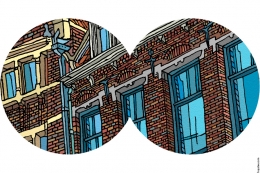 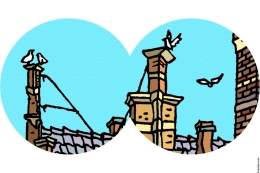 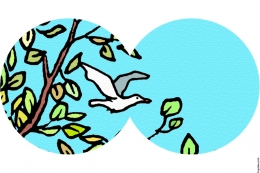 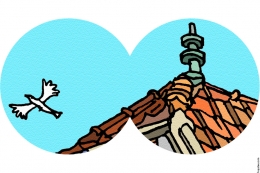 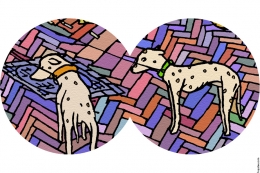 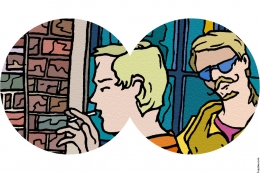 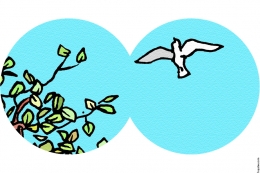 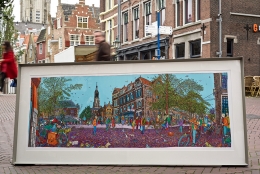 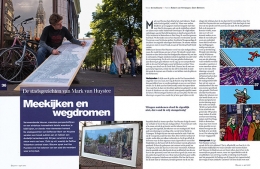 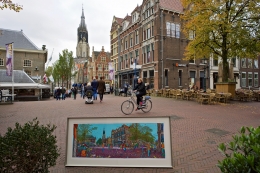 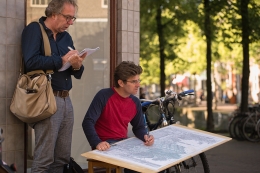 HOW IT ALL BEGAN BY JAN VAN DER MAST

While Mark quickly adds the complete daily menu of the Wijnhaven Café to his drawing, passion fruit cheesecake and all, I quietly take in my surroundings. In other words, I am observing. It’s Sunday afternoon, and the atmosphere at our location is even more pleasant than it usually is. How come? Is it the mild autumn sunshine, the day trippers sitting at their outdoor café tables, the glasses of wine, the music being played by the band in front of the café? I listen for a while. Ah! I recognise the tunes. ‘Stuck in the middle of you’, followed by ‘Where’d all the good people go?’ How apt, since all the people passing this panorama location appear to be ‘good people’. On the bridge I spot a bearded man, fifty-ish, in sunglasses. He’s wearing a hat that reminds me of Walter White, the chemistry teacher turned criminal from ‘Breaking Bad’. Yes, it really is a hat as worn by Heisenberg, the underworld alias adopted by Walter in the popular television series. A little round hat with a black band and a narrow brim. Is that a good description? Language is my thing, so to speak, but giving an accurate description of what I see is still not easy. This is where an artist has the advantage. A few well-traced lines, and seconds later you’ve got a good likeness of the kind of hat that any fan of Walter White would instantly recognise as a typical Heisenberg hat.

Any way, our own Walter has just wrapped his arm around the shoulders of his girlfriend (or is she his wife?) and is pointing to the right, in the direction of the canal. He is explaining something, but I can’t hear what he’s saying. I’m too far away to catch any snatches of the conversation, as I like to do. Given the relaxed body language of the couple, the looks they exchange, the little smile she gratefully flashes at him, the man’s arm which now drops to her waist, I can guess they are having a good time, that they are experiencing a Memorable Moment, that they are happy together. Ouch! In no time my neutral observations have been transformed into conclusions drawn by my mind. Without my even asking, it has dreamed up opinions about people I don’t even know, simply because at a distance of ten paces they appear to be happy. Yes, Heisenberg and his wife – I’ve only had them on my retina for a minute or so – are the kind of couple that dreams are made of, people who enjoy a really healthy sex life. And on a daily basis, too. They are always in for a cuddle, or more. He likes to read poetry to her. He will pick up a volume and open it to read her a love poem about how it all began.

He reads another two, three poems; she listens with great pleasure, but after the third she’s had enough, and starts to stroke his stomach with her hand. He closes the volume and puts it down on his bedside table. Her hand slides down his body and… Oops! My mind has kidnapped the images observed by my eyes. I need to get rid of this Heisenberg, quickly, so I look at Mark, at his drawing board. To the left he draws a couple of lines that flow into curves, and something starts to appear that looks like… Like what? How do you put it? It’s organic, it looks like… Those must be the contours of... Right, it’s a dog! Yes, it’s definitely a dog. It’s plain to see now. There’s no mistaking it. A dog with long ears, a pointy muzzle, and a really skinny body. One of those dogs with no belly and standing very high on its legs. It’s a greyhound. I look over towards the fish market stall and I spot the greyhound Mark is drawing. There are actually two of them, white with little brown spots. They are just standing there, waiting patiently on the bridge. They belong to the blonde lady in the red coat and the elegant, moss-green boots. The lady is standing next to a man in a colourful shirt and black, pointy shoes. They are oblivious of each other as they listen to the music. 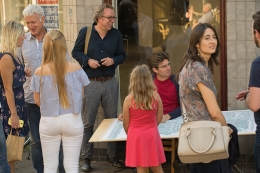 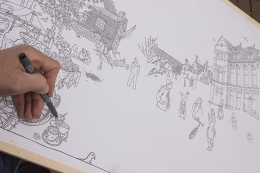 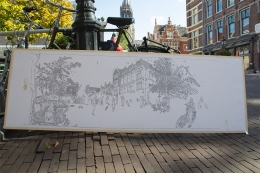