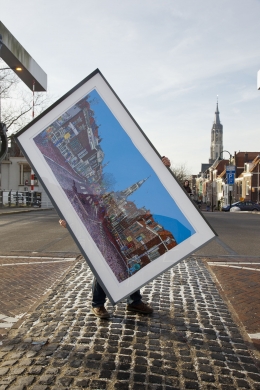 Traffic rumbles across the Koepoortbrug leading into the old town centre of Delft. In April 2010 the traffic came to a halt due to roadworks. It was a unique opportunity to go and stand in the middle of the bridge and draw a townscape. Without realising it, I must have been influenced by the shop of Brehm that sells party goods, as the townscape was coloured in with bright, saturated colours.

This page gives information about the prints and how to buy them, outlines the creative process and provides background details about this special location. 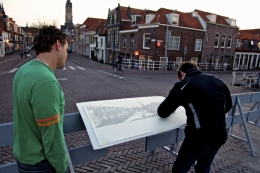 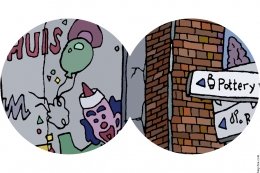 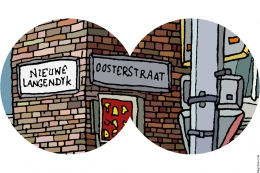 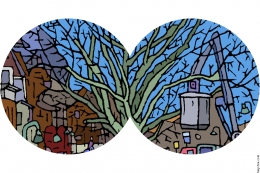 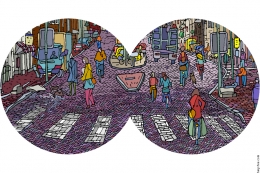 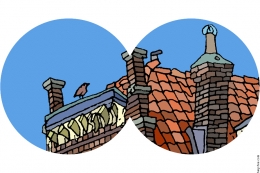 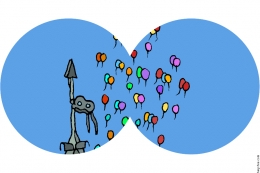 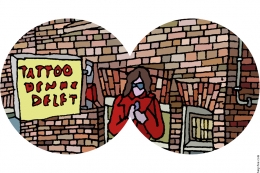 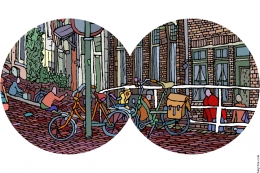 Details from the townscape (slide SHOW).

Come springtime he’s there again, the street artist. He even texts me: “I have returned, and I’m standing near the Koepoortbrug”. I jump on my bike and cross the centre of town heading east. Mark stands right in front of the bridge, which is temporarily closed to traffic for maintenance. Mark has put his drawing board on a barrier and is drawing the pavement bricks in front of a shop using a fineliner. He is creating a panoramic view looking down the Nieuwe Langendijk.
“When did you start?” I ask.
“Now there’s a question I haven’t heard before. I expect you also want to know how many bricks I’ve drawn?” Mark is razor-sharp. A couple are watching over his shoulder. After a few minutes the woman walks on, but the man stays behind, even lifting his sunglasses to better observe the work. He is in no hurry. “We have an appointment at ten past four, and he won’t wait!” the woman shouts. The man looks up, annoyed, and shuffles off.
“I started the day before yesterday; I worked long days. It has to be finished soon, for tomorrow they’ll be cutting pavers behind me, and I’ll be shaking in my shoes.”
A lady aged around fifty spots Mark drawing.

“He’s drawing the whole of Delft!” I claim. “All the canals and squares; everything!”
Mark carries on drawing regardless.
“Daanes has already done that,” the woman remarks.
“All of Delft?”
“Yes, in watercolour.”
Since I’m fielding for Mark, I retort, “but that doesn’t count, watercolour. It has to be done using fineliners.”
The woman walks on, calling her friend who is waiting at the bridge: “Daanes has already done that, hasn’t he? The whole of Delft?” Fortunately, I don’t hear the answer.
“Has anyone ordered this townscape yet?” I ask Mark, hoping I’ve found a more original question this time.
“Yes, those people over there have said they’ll buy this one, but they haven’t a clue about the price. Now they’re stuck with it; I’ll make them sign on the dot.”
“Sure, you’re the master enforcer of street artists. Be careful, though; get too greedy and they’ll trip you up.” Mark chuckles. The drawing is nearly completed. He now only has paving stones left to draw.

“but that doesn’t count, watercolour. It has to be done using fineliners.”