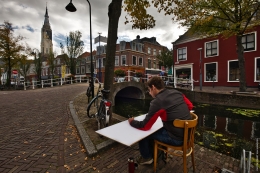 There is so much to see if you look carefully from the artist’s position near the Lakenverversbrug (Cloth Dyers’ Bridge). You get a view not only of the New Church, autumn leaves, a facade painted ox blood red, passers-by, birds and airplanes, but also a complete underwater panorama when the sun shines into the water of the canal. 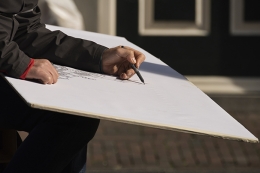 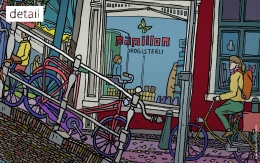 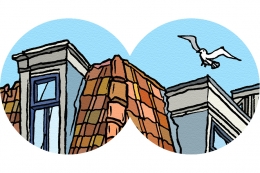 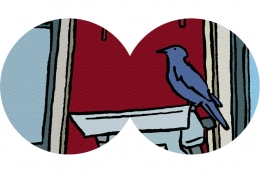 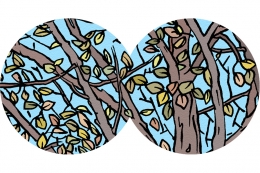 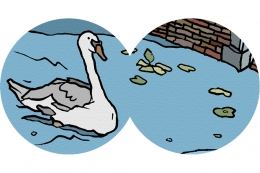 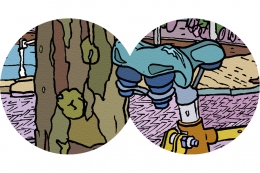 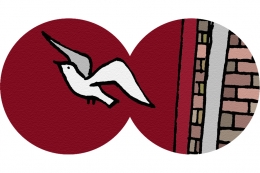 ORDERING A PIECE OF A TOWNSCAPE
Many customers want to see a panorama in real life before ordering. If you are unable to arrange a studio visit, I can send you a set of samples that will enable you to assess the quality and presence of the works.
A set of 4 samples costs 14.95 euros including postage. Each set includes one cardboard surround so one sample can be framed as a mini painting.
You can order your samples by sending a message to info@huystee.com, mentioning ‘samples’ and the name of the townscape. 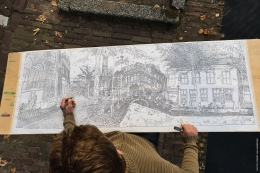 IS OUR HOUSE IN IT? BY JAN VAN DER MAST

‘The light in this spot is wonderful.’ Mark is brimming over with enthusiasm when he talks about his new townscape, set in Delft. The date is mid-October, a lovely autumn afternoon. Mark has installed himself along the Verwersdijk canal, with a view of the Choorstraat. ‘This morning the light shone under the bridge, and later this afternoon the whole Choorstraat will be lit up. All the houses on the south side will be ablaze with the setting sun.’
As always, Mark, with his two-metre long drawing board on his kees, has no lack of attention from passers-by. Another artist once told him that Delft is the only town in Holland where the canals run north to south, which is why the light is so special. Apparently, it was also the reason why Salvador Dali visited the town a number of times. ‘I have no idea whether it’s at all true’, Mark muses. ‘Perhaps I should check the facts? There is so much fake news about.’
At the point where the Choorstraat meets the Vrouwjuttenland, you cannot miss the bold slogan on the corner shop advertising sewing machines: ‘LEWENSTEIN NAAIMACHINES’. The raised lettering has been there for many decades. Mark tells me that the locksmith on the other side of the canal is planning to move into the shop, and that they will be removing the lettering to replace it with their own name, but they will be using the same font. Very laudable I’m sure, but it doesn’t stop us from trying to come up with the name of a marketable product by recycling the letters from ‘LEWENSTEIN NAAIMACHINES’. In spite of our best efforts, we fail to come up with anything remotely useful. Oh well, we will just have to accept the fact that the facade will soon be advertising locks and keys.

I turn to Google and read: ‘Were you in the habit of buying your haberdashery, sewing machines, and material from Lewenstein Naaimachines B. Broekhuis? From now on you will have to go elsewhere.’
It doesn’t say where to go. Has B. Broekhuis retired from business? The town is changing at a rapid pace. Fortunately the familiar Lewenstein facade has been saved for posterity in Mark’s panorama.
An elderly couple stop behind Mark to study the pen drawing, three-quarters of which has now been completed. ‘Is our house in it?’, the lady asks. She lives over a shop one door along from the pet shop. Mark still has to fill in the details of the facade, but there won’t be much to see, as there is a tree in front of the house. ‘Pity’, the woman says. ‘If you had been sitting two metres to your left, you would have captured all of our house.’ The couple have been living there since 1995, and they wouldn’t want to move for anything in the world. ‘It’s such a lovely spot. And then there are the royal funerals, when you have a choice of staying in to watch everything on the telly, or going out to see it all in real life. If you get there early, you can bag a spot right at the front. Last time, when Bernhard went, we had a whale of a time.’

While the woman explains in detail how much they enjoyed themselves during the royal funeral in 2004, het husband asks Mark: ‘Would you call your style, um… realist?’
‘Yes, I draw it as I see it.’
‘Ah!’
Meanwhile, on the other side of the canal – in front of Papillon, the chemist’s – a female student has settled in a spot in the sun to eat her French sandwich. She appears to be trying hard to look her best.
‘She wants to be in your drawing, Mark,’ I say. ‘That’s for sure.’
Mark’s left hand rapidly sketches her face. ‘Judging from the length of that sandwich I have plenty of time left to draw her.’
Then an electric shuttle shoots past with a bride and groom in the back. Without making a sound, the vehicle speeds in the direction of the town hall. Mark looks at the passing bridal couple: ‘Is that going to be the new thing? CO₂ neutral weddings?’
I ask Mark if he has caught any special remarks from passers-by. ‘Did you catch any nice snippets, or haven’t you had the time for that kind of thing?’ Mark pulls out a notebook and quotes the reaction of a man looking at his drawing: ‘It reminds me of delapidation. I like that.’

“Judging from the length of that sandwich I have plenty of time left to draw her.” 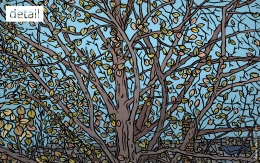 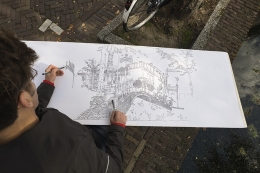 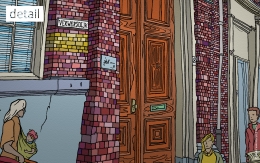 The date is Friday, 19 October 2018. Mark has almost completed the townscape. All that is left to do is to draw in the cobblestones of the Verwersdijk. ‘I have been working in this spot for a couple of weeks now, and it wasn’t until today that I noticed that the bridge has a name.’ He points out the worn name plaque set into the side of the bridge: Lakenverversbrug (Cloth Dyers’ Bridge).
It is the place where for centuries newly dyed woollen cloth was draped over the bridge railings to dry. One bridge further along, where the Trappist beer pub sits on the corner, red cloth would be hung to dry, and the canal water would turn blood red with the dripping dye. This is why – with a touch of drama –the bridge is called Bloedbrug: Blood Bridge.
This brings us to my favourite subject, the history of Delft. I tell Mark how 150 years ago our town was hit by cholera and how it killed 400 people. Most of the victims came from this poor area of town, where the water was badly polluted and flowed more slowly than it did in more up-market canals like the Oude Delft and the Koornmarkt. In 1866 Delft was yet to become a ‘Centre of Technology’, and no-one had linked cholera with polluted drinking water yet. The local authorities banned the sale of green, unripe gooseberries, which were thought to irritate the bowels. The local newspaper recommended to keep the cholera at bay by drinking a glass of liqueur with a dash of spirits and a lump of sugar.
‘Indeed, Mark, we have come a long way since then.’ I have finished my story, and watch an empty Red Bull tin float past. ‘See? There’s progress for you.’

I then look at Mark, who, perched on a kitchen chair with his long drawing board across his knees, is wedged in tight, with a black Ford Fiesta poking into his back. The car is parked in a special spot for the disabled, newly created this week by the council. Things change all the time in this place. The day before, council workers were putting up swirling garlands of festive lighting across the canal. ‘Too late for your drawing,’ is my conclusion.
‘Just as well,’ Mark says. ‘It would have made the image far too crowded.’
I look away. A thin lady pulls the geraniums from the planters hanging off the bridge railings and puts them on the back of her bicycle to take them away. The bike falls over, and I am about to dash forward to help her when she puts up a thumb to indicate that she has everything under control. She moves off unsteadily.
‘By the way, have you found out yet how to pronounce ‘Choorstraat’?’, I ask Mark. ‘Is it ‘ch’ as in ‘cholera’ or ‘ch’ as in ‘loch’? Have you had anyone stop by and solve the conundrum for you?’
‘Well,’ Mark says, ‘as I understand it, people born in Delft pronounce it ‘k’ as in ‘cholera’, while outsiders like myself say ‘ch’ as in ‘loch’.’
‘I thought that the ‘choor’ in Choorstraat was a reference to the choir of the Old Church, on which the street looks out?’

‘Oh, I was given to understand that it was a corruption of ‘koe’ (cow) and that the street was originally named Koestraat. On their way to the weekly cattle market, cows would pass through this street.’
Mark and I can’t decide on the right answer. I decide to look it up on my friend Google (or should that be Kookle?) and find that sometime around 1450 the name Coestraet was changed into Koerstraat. Koer is the Old Dutch spelling of Koor (choir). The variant spelling – Choor – derives from the Latin Chorus, in which the ‘ch’ is pronounced ‘k’. So in the end it would seem that we should be saying Koorstraat when talking about the Choorstraat.
Right, that’s a satisfactory outcome, just before Mark finishes the last lines in the drawing. His left hand darts across the paper, and the blank white space at the bottom keeps shrinking.
‘How are things back home, Mark?’
‘What about them?’
‘Is it party time when you finish another townscape?’
‘Not really, no, but my family are very supportive. The other day my daughter Linde showed me an Instagram movie of a boy standing in front of my drawing and flexing his muscles. Linde is hoping that I’ll go on a European tour and that the family can come along.’

‘Europe? Think big! Why not start in New York? Times Square is a good place to draw. Lots of detail.’
Mark laughs. ‘Not so easy with all those giant illuminated billboards. They keep changing all the time. It’s like the people I’m drawing now. They are all made up of parts of different passers-by. In New York I would be drawing composite adverts. I might be starting with Coke and end up with, eh... Budweiser.’
I try to picture Mark sitting on his kitchen chair in Times Square, surrounded by a throng of inquisitive Americans firing question at him: ‘Hi, how are you doing? Where are you from?’
I can only hope that Mark has been listening to what I have been saying and will take me along as his writer for the trip, but first there is the drawing to finish. Just another hundred hours or so on the computer to fill in the colours.

“with a touch of drama –the bridge is called Bloedbrug: Blood Bridge.”