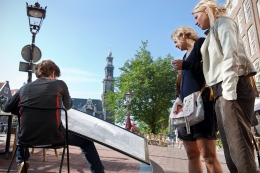 At the Leliesluis lock, the Prinsengracht is a lively place with a nice view of the Westertoren. An excellent location to draw a panorama on the spot.

This page contains information about the creative process, stories by Amsterdam people and background details about this special location. 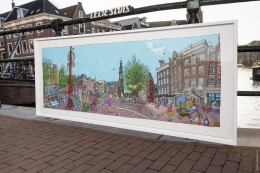 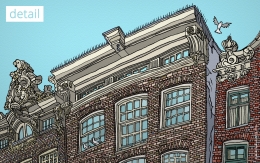 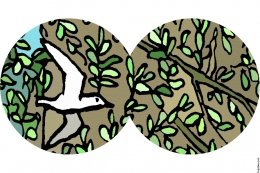 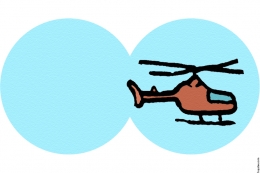 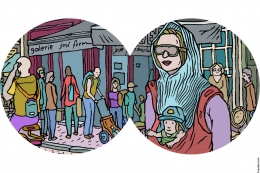 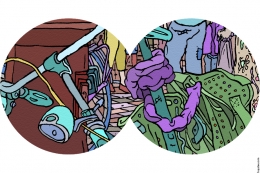 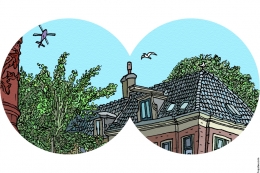 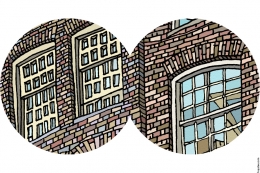 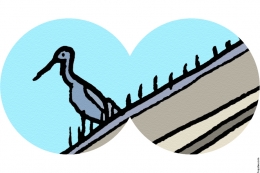 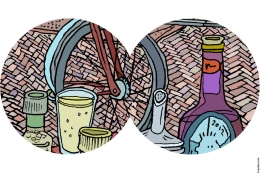 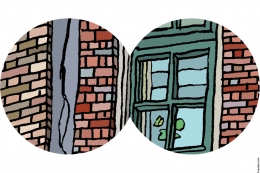 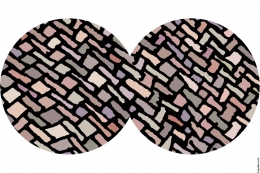 ORDERING A PIECE OF A TOWNSCAPE
Many customers want to see a panorama in real life before ordering. If you are unable to arrange a studio visit, I can send you a set of samples that will enable you to assess the quality and presence of the works.
A set of 4 samples costs 14.95 euros including postage. Each set includes one cardboard surround so one sample can be framed as a mini painting. You can order your samples by sending a message to info@huystee.com, mentioning ‘samples’ and the name of the townscape. 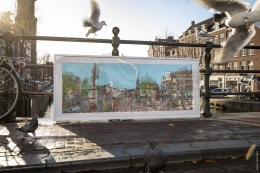 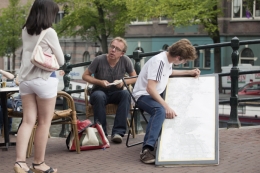 The artist did warn me: the Leliesluis bridge is an extremely lively place. ʻWe don’t have anything like this in Delft! There’s so much going on all the time.ʼ
When I arrive on the spot, mothers with carrier bikes and a wide assortment of tourists are huffing and puffing across the bridge, while some grey cygnets serenely float on the water in the wake of their mother. It doesn’t take long for my attention to be caught by a lovely pair of female legs ending in stylish short boots. The young woman, engaged in an alfresco telephone conversation, is wearing a T-shirt sporting the text ʻYou? Me? Oui!ʼ. She’s pacing up and down in a temper: ʻYou prick! You really are a prick!ʼ
A well-tanned man in his forties is standing behind Mark, looks approvingly at the townscape in the making, and announces in a broad Amsterdam accent that he was born ‘there’ – he points in the direction of the Tulip Museum – and works across the water: ʻAll my life centres on this stretch of Amsterdam, the Jordaan district.ʼ

ʻSo you don’t get to see much of the world?ʼ, I ask him.
He smiles. True inhabitants of the Jordaan stay put. Times were when people would even have their holidays in their own street.’ In next to no time I’ve been brought up to date on the history of this truly working-class district, with its boundaries of Prinsengracht, Lijnbaansgracht, Brouwersgracht, and Leidsegracht. I also get dished up a vivid version of the Eel Riots of 1886, when locals raised the drawbridges to keep out the police.
An old man with long, white, combed-back hair zig-zags along the outside café tables and yells: ʻI can smell pussy!ʼ
My storyteller grins and walks on, off to his work across the water. ʻPussy!ʼ, the old man yells, ʻI smell pussy!ʼ
A father and son stop to look at the drawing. The boy, about eight years old, bends forward to get a closer look at the details. ʻCareful! Not too close!ʼ, the father calls out. ʻDon’t bump

into the gentleman, or he’ll have to start all over.ʼ The man is clearly more worried than the artist, who is concentrating on putting the finishing touches to a house boat. ʻCareful! I told you not to get too close! I said, careful! The gentleman doesn’t like it at all, you know!ʼ The father keeps admonishing his son, and finally jerks him away by his sleeve, walking off with an apologetic gesture.
A pair of trendily dressed men stops to look at the drawing. One of them takes a few pictures of Mark, while the other one, wearing a flamboyant hat, embarks upon an extensive interview. They turn out to be travel writers from Norway writing travel articles for a travel magazine.
The woman with the pretty legs wanders back into my field of view. I take another look at her T-shirt, and it really reads: ʻYou? Me? Oui!ʼ. Then a young man comes cycling across the bridge, all in a sweat. He attempts to kiss the woman, but she’s having none of it. ʻYou’re such

a dickhead! I’ve been waiting here for ten minutes.’ He shrugs, and tethers his bike to the handrail of the bridge with a large padlock. Together they walk into the estate agent’s.

ʻAll my life centres on this stretch of Amsterdam, The Jordan.ʼ ʻSo you don’t get to see much of the world?ʼ, I ask him. 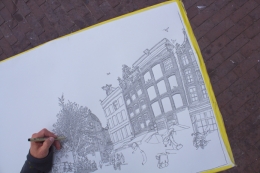 The Townscape after 13 hours of drawing.

Often heard: “And all that using your left hand!” 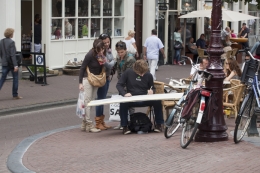 The townscape after 7 hours of drawing. Another 40 hours or so of drawing and 80 hours of colouring lie ahead. 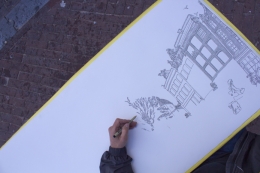 Quite a few horses come walking past the Leliesluis. There would have been a lot more in the old days. It’s how the Brown Horse pub got its name: a good hundred years ago, a horse and cart couldn’t stop as they came down the steep incline and crashed straight through the front of the building. 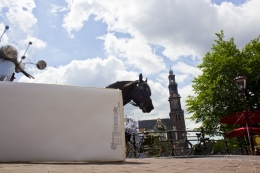 “What if I make a mistake?
…I prefer not to think about it.” 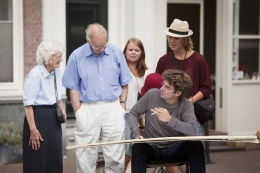